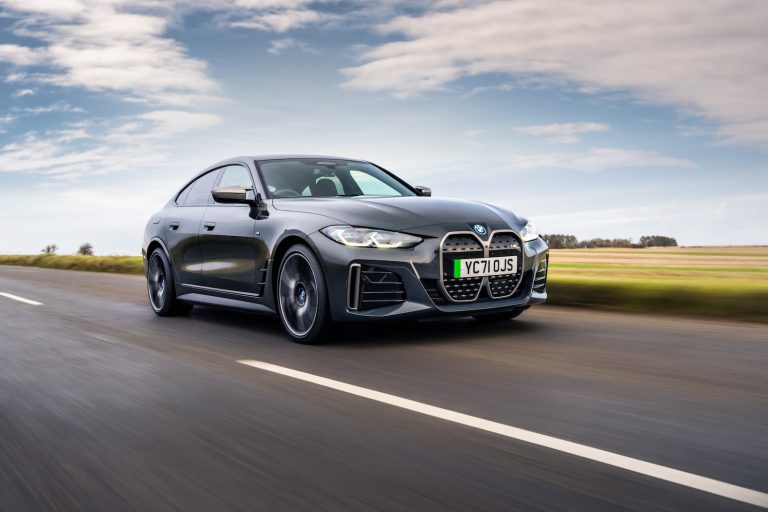 BMW’s iX SUV may be getting all the headline attention in the German firm’s range, but the reality is that it’s this all-electric i4 that will be getting the bigger seller of the two and has the wider appeal.

All three versions of the i4 get the same 80.7kWh battery, albeit with different power levels between the rear-wheel drive 40 and the four-wheel drive M50 which packs an EV punch the equivalent of 544bhp.

Despite its saloon-like lines, the i4 is based on the 4-Series Gran Coupe hatchback body (which takes half of all 4-Series sales) giving the i4 a good level of practicality. There are frameless windows as well as flush door handles, while there is a solid front grille and blue highlights throughout as well as blue flash along the side sill – though this is a delete option if you wish.

While it may not immediately stand out as an EV, it’s a perfect familiar step for those new to electric technology or moving across from a traditional petrol or diesel 4-Series.

BMW I4 – POWER AND RANGE

Both models are capable of rapid charging up to 200kW and capable of a 10 to 80 per cent charge in just 31 minutes. A full charge at an 11kW domestic charger takes eight hours.

On the 40, BMW claims an efficiency rating of between 3.1 and 3.8mls/kWh, while the M50 has a range of 2.6-3.2mls/kWh. The only caveat to that is your own personal willpower with all of the M50’s performance on tap and we saw it return just 2.0mls/kWh during some admittedly enthusiastic driving.

Whether or not you like the looks of the traditional BMW 4-Series, it’s hard to argue with how it drives on the road. Refined, involving, comfortable and trustworthy, it simply feels like a very well engineered sports saloon – it’s not by mistake that you see so many on the road.

So how will this i4 compare? There is the thorny issue of weight after all, with even the 40 model tipping the scales at over two tonnes.

And what’s the final answer? The harsh reality is that this i4 simply doesn’t compare with its traditionally-engined counterparts. Why? For the simple matter that it’s even better. Yes, there’s that weight, but it feels low down and the i4 feels just as lithe and agile as ever. Without driving the two models back to back, it would be generally hard to notice a difference. The steering is sharp and communicative, there’s little body roll through corners and the ride quality is excellent too.

No, there’s obviously no engine noise and instead there’s a digital whine which gets stronger in the Sport driving mode. Not everyone will like it, but we did. Again, like the iX SUV, there’s also an adaptive mode for the regenerative braking, but we found ourselves preferring the more predictable nature of the B mode.

Overall though, the BMW i4 has all the benefits of the standard 4-Series Gran Coupe allied to all the benefits of a very well-sorted electric car. So not only is it a great stepping stone from someone coming from a petrol or diesel 4-Series, but it’s actually a very capable EV in its own right too.

Again, like the exterior styling, the inside of the i4 isn’t entirely unlike that of the 4-Series standard Gran Coupe. There’s a lovely curved main screen in front of the driver round to the centre of the dashboard. Aside from a blue stop/ start button beside the gear selector, there’s little to give away the battery power under your right foot.

Ironically of course, the i4’s biggest strength, its familiarity, might also be seen as its biggest weakness as well, with a lack of unusual styling cues or ‘tricks’ in the interior. No, it may not be the most exciting EV on the market, but there’s a lot to be said for predictability and that familiarity. Especially so, for those drivers moving to their first EV, there’s nothing here that will scare the horses.

In terms of practicality, the good news is that there’s that hatchback rear, although the optional Harman Kardon stereo steals some of the under-floor storage space of an otherwise decent-sized boot. The rear seats get a handy pair of USB C sockets, but they’re a little cosy on legroom for anyone over six-foot tall and foot space under the front seats is a little tight too. Despite plenty of light, they feel a little claustrophobic which isn’t helped by the intruding rear wheel arch making a graceful exit rather difficult.

In case, you haven’t already guessed, we don’t like the new BMW i4. We love it. Along with the Polestar 2, it’s probably one of the best electric four-door family saloons you can buy at the moment.

All of that EV knowledge from the i3 clearly hasn’t gone to waste and it’s incredible that the i4 doesn’t feel more compromised given that this isn’t a stand-alone EV platform, particularly when it comes to its packaging. In fact, aside from for those long distance driving needs and the price tag, it’s so good that we imagine it could easily make life difficult for the standard 4-Series Gran Coupe. A brilliant electric family saloon.