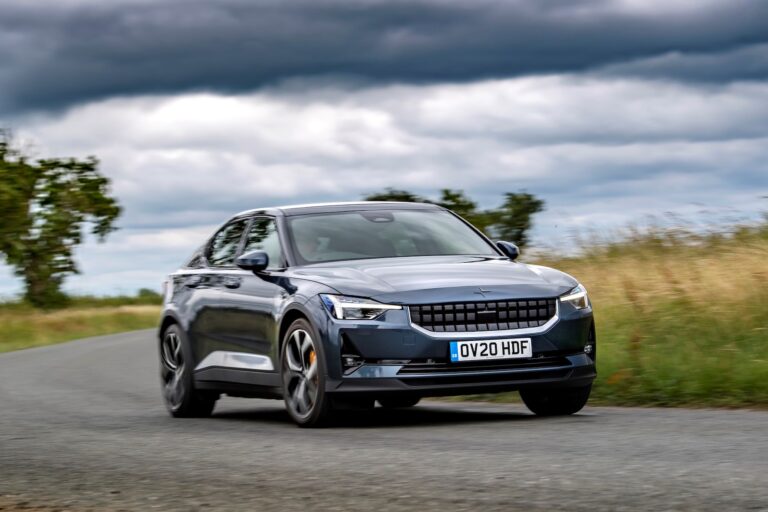 Enthusiasts will know Polestar as a producer of high-performance Volvos, but the majority of car buyers are unlikely to be that familiar with Volvo’s new all-electric brand.

In reality, its first car was the Polestar 1, an expensive two-door coupe that was only available in left-hand drive back in 2017, but this Polestar 2 is a much more mainstream offering that is aiming directly for the likes of the Tesla Model 3.

There’s more to come too, with two new SUVs coming from Polestar in 2022 and 2023, so this is an exciting company with a bright future ahead of it.

It may look like a four-door saloon, but the Polestar 2 is actually a five-door hatchback and while there are echoes of Volvo design, it’s actually a pretty good looking car. Some people aren’t fans of its boxy, traditional looks, but we quite like the retro-feel and they’re bought up to date with the curved LED light strip at the rear.

The only real design elements of the Polestar 2 that we really don’t like are the bulky door handles, which look out of place when so many are going down the pop-out handle route and also the key fob. OK, complaining about the key fob might sound petty but it’s a cheap-feeling, matchbox-sized rectangle of plastic which feels out of place with the premium feel that Polestar is meant to be aiming for.

The Polestar 2 is offered with a choice of two batteries – 64kWh and 78kWh – with the equivalent of 221bhp and 228bhp, which it calls the Standard range and Long range models respectively. We’re test driving the 64kWh model here.

In single motor form, both of these are front-wheel drive, although the Long range model is also available in dual-motor form (with four-wheel drive) as a performance choice with 402bhp. While that extra power is apparent against the stopwatch (0 to 60mph in just 4.5 seconds versus 7.0 seconds for the other two), the fully-charged range drops to 299 miles. This 64kWh model has a range of 275 miles, while the 78kWh car boasts 336 miles and, for its £3000 premium, this latter car would appear to be the best option.

At a 150kW rapid charger, Polestar claims a recharge time from 0 to 80 per cent of 35 minutes with the 64kWh model taking seven hours for a full charge at a domestic wallbox and eight hours for the 78kWh battery.

In terms of efficiency, Polestar claims a 3.3mls/kWh average for the 64kWh model, but we couldn’t get close to that even with gentle driving averaging just 2.0 mls/kWh.

Despite, on paper, this being the least powerful version of the Polestar 2, it performs remarkably well on the road. It’s suitably swift from a standing start and there’s a good press in the back when you go for an overtaking move.

Better yet, there’s very little body roll through corners and the steering is sharp and direct, enabling you to place the car accurately on the road when cornering and giving you a good amount of confidence too. The infotainment system menus also allow you to alter the weight of the steering between Light, Standard and Firm, although the middle option seemed the best for us.

Either way, the steering does lack feel and could do with more information being fed to the driver about what the car is doing beneath them, the weight of the car not helping that feeling either. The same goes for the ride quality which improves with speed but generally just feels too fidgety on less than smooth roads.

Within the infotainment system you’re also able to tailor your drive experience, there are the other menus which allow you to turn the standard automatic creep function on or off and also adapt the regenerative braking between three different settings. The strongest of these, confusingly called Standard, will bring the car to a standstill; that’s great for urban roads, but for everyday driving the middle Low setting is probably a better balance.

If there’s anywhere where Polestar could immediately fall flat as a premium brand, it’s here with the interior. The rest of the car could be incredible, but poor materials or build quality will turn customers off immediately.

Thankfully, this Polestar 2, largely nails it. Yes, there are a few switches and controls that you might recognise from Volvo, but that’s no bad thing and overall the interior is excellent. There are lovely surface changes and use of different materials throughout and it’s a very comfortable and relaxing environment.

The large portrait-format infotainment screen has the majority of the Polestar 2 controls and it’s very intuitive to use with Google Automotive Services and voice control. Dig further into the menus and there’s lots about the car that you can adapt to your own preferences too. We wouldn’t mind a little more storage space though, as there’s only a cup-holder and forward pocket with two USB C sockets as well as a narrow tray by the central tunnel.

There’s a good amount of space in the front although the seats are, rather oddly, semi-electric, with the recline function still on a manual wheel at the side. Any adults taller than six-feet might feel a little claustrophobic for any length of time in terms of headroom and also space for your feet if the front seat is set to its lowest position. Also, entry and exit is a little awkward due to the angle of the rear wheel arch and narrow door aperture.

On a more practical front, there are three Isofix child seat mounting points, with one on the front passenger seat, there’s a 405-litre boot with a large under-floor storage area and a handy cubby under the front bonnet for the charging cables.

Also, rather than offering a long list of options to choose from, Polestar has kept things simple with three different packs to choose from – Plus, Pilot and Performance. While Performance speaks for itself with larger alloy wheels and bigger brakes, in short, the Plus offers more interior and comfort functions such as heated seats and a panoramic roof, while Pilot is more everyday safety items such as adaptive cruise control, a 360 degree camera and adaptive LED headlights.

For those customers looking for a premium electric alternative to the Tesla Model 3, this could well be it. The Polestar 2 isn’t perfect, but it’s not far off and there’s a lot here to like from the premium interior, to how it feels on the road. Yes, we’d like some more driver feel but as an alternative to mainstream brands, it’s easy to recommend.

That said, within the Polestar 2 line-up, it’s probably the Long range 78kWh version of this car that we’d go for if your budget allows. For the additional £3000 (or whatever monthly payment that equates to), you’re getting another 61 miles of range and for us that will make it much more useable on a daily basis.

Perhaps the biggest thing holding the Polestar 2 back however, will be a lack of overall awareness. Without dealers, Polestar has product spaces with specialists rather than commission-driven sales people, but while they’re expanding, there’s only a handful at present. At least the servicing is done by Volvo dealers, which is more helpful.

The niche Polestar 1 aside, as a first stab at a mainstream all-electric car, you have to take your hat off to Polestar. For progressing from another EV or taking your first step into automotive electrification, there’s no question that the Polestar 2 should be on your shopping list.