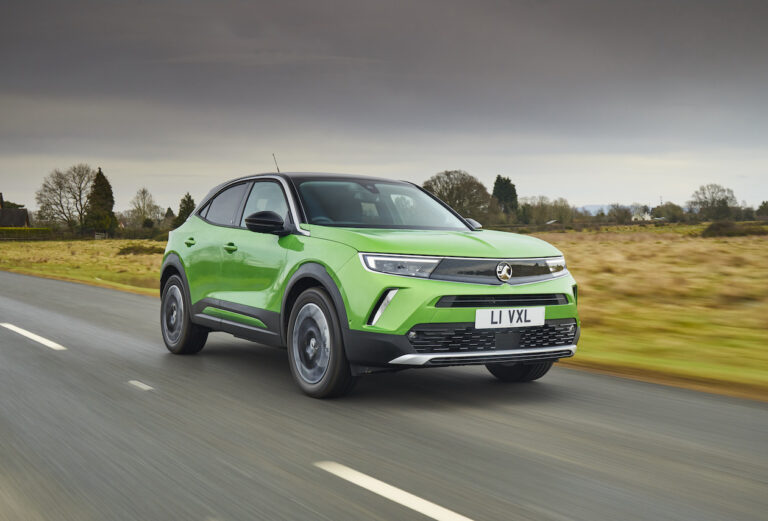 The new generation Vauxhall Mokka couldn’t be much more different from its predecessor. While the previous model might have enjoyed some enviable numbers in the sales charts, it was never the most exciting or dynamic choice in the small crossover market.

This new Mokka-e from Vauxhall is an entirely matter however. Like its Corsa-e supermini stablemate, the Mokka-e offers the same bodystyle with a choice of conventional petrol or diesel engines or, as we see here, with electric power with this Mokka-e.

Based on the same platform as the Corsa-e means this Mokka-e gets a single 50kW version with only trim levels to choose from.

Once again, while before the Mokka’s styling was boring and rather middle-of-the-road, this new model is like a breath of fresh air.

We love the new Vauxhall Vizor front grille that is being introduced on more Vauxhall models in the future, giving the Mokka-e a purposeful look with the narrow LED lights. The all-black roof and sharp rear end just complete what is a very smart car.

Also, again like the Corsa-e, aside from the small ‘e’ badges on the rear tailgate and centre side pillar between the front and rear doors, there’s also no visible difference between the Mokka-e and its petrol or diesel stablemates. Whether that’s a good bad thing is a matter for personal judgment, but at least it gives buyers and those new to EVs a chance to directly compare the two technologies alongside.

As with its styling, the upside of the Mokka-e is that buyers can have a direct choice of engines or electric power in the same bodystyle, which is great.

The downside however is that it brings certain limitations to that bodystyle as it has to accommodate those different technologies. Part of the result of that is that this Mokka-e is only available in a single 50kW form like the Corsa-e. With a 209-mile range, that may well be sufficient for most drivers, especially in a small SUV like this, but for anyone planning longer journeys, they may find it a little restrictive, especially in colder temperatures – more on which later.

In terms of efficiency, Vauxhall claims a rate of 3.6mls/kWh so slightly behind the smaller Corsa-e, but in real-world driving we actually averaged 3.7 or 3.8mls/kWh which was impressive. Against the stopwatch, the Mokka-e manages the 0 to 60mph sprint in 8.7 seconds with a 93mph top speed.

In terms of charging, the Mokka-e gets the 11kW on-board charger as standard (it’s an option in the Corsa-e), with the result that at a 50kW rapid charger it can achieve an 80 per cent charge in 45 minutes or takes seven hours and 30 minutes to achieve a full charge on a 7kW domestic home charger.

VAUXHALL MOKKA-E – ON THE ROAD

When it comes to the Vauxhall Mokka-e’s road manners, there are both positives and negatives to reports. The positives are that there’s little body roll through corners, the steering is direct enough and the battery is reasonably responsive.

Again as on the Corsa-e, there are three drive modes to choose from – Sport, Normal and Eco – with the latter improving your range but reducing your available performance and cutting things like the heater. The problem though – as hinted at earlier – is that the battery range seems very sensitive to cooler ambient temperatures, so you might end up without a heater to extend your range when you most actually want it. Anything below around 10-12 degrees centigrade seems to have a negative effect on your range. Since we drove the Mokka-e, Vauxhall has fitted a heat pump to hopefully improve this.

Overall, the Mokka-e’s driving habits are fairly inoffensive which, given its focus as a mainstream car for all needs is probably fair enough.

That said, mainstream cars can also be good to drive, though nobody seems to have told Vauxhall this. That same steering is pretty lifeless about what the car is doing and, again for what is meant to be a mainstream model, the ride is far too harsh. Road imperfections that you wouldn’t expect to feel instead come crashing through the cabin in a way that might be (just about) acceptable in a sporty hot hatch, but not here.

The regenerative braking remains a fairly blunt tool as well, with only D and B modes available. The B mode strengthens the regen braking considerably, but it’s hard work to drive smoothly in that mode on faster, non-urban roads. Our preference would be to have at least one mode between those two, if not more as on other EVs.

Also, not helping your range is a rather odd software fault that we’ve also discovered when driving the Corsa-e too. Every time you get into the Mokka-e to set off on a journey, the automatic default is for the air conditioning to come on. We usually prefer air con to remain off apart from in the height of summer, but in an EV it seems especially pertinent as that will obviously hurt your range still further too. It’s frustrating to have to remember to switch it off every time you get in.

Let’s be honest, nobody expects a Vauxhall to have a smart premium interior, but you might have your eyebrows raised by the Mokka-e.

The seats are comfortable and supportive and the sharp looks of the exterior are repeated here inside. Better yet, the height adjustment means you can set the driver’s seat quite low giving it quite a sporty feel.

All of the instruments and controls are clear and well laid out and there was a slightly retro 1980s-style black and red look to the design too. The digital dash in front of the driver also enables you to tailor the instruments in front of you from traditional dials to the sat nav or the trip computer which is a nice touch.

Yes, some of the interior plastics could be better, but the infotainment system works well once you’re familiar with it and it feels smart – though why the gear selector is 3-4mm lower than the surrounding centre console is a little odd.

The glovebox is frustratingly small, but there’s a third Isofix child seat mounting point on the front passenger seat and a good sized boot. Space in the rear is good for headroom, but anyone beyond their mid-teens will be complaining about a lack of legroom, especially compared with the previous generation Mokka. In all though, that’s the only demerit compared to its predecessor, whereas otherwise this car is literally in a different league for fit and finish.

It’s hard not to step away from the Vauxhall Mokka-e without a sense of admiration. In a single swoop, Vauxhall has turned a popular but dynamically disappointing crossover into a handsome contender that now offers electric power to boot – leaving several of its rivals trailing, even if just on a purely technological level.

The fact is that the Mokka-e may not be perfect, but by bringing electric power to this level and to mainstream buyers in such a smart-looking package, means you have to take your hat off to Vauxhall. Could it better dynamically? Yes. But in that regard as with so many others, it’s leaps and bounds ahead of its predecessor and that never stopped that car being a big-seller.

Aside from its sister car, the Peugeot e-2008 and pricier VW ID4, there’s not much to choose from in the electric crossover market, so this Mokka-e is perfectly placed to take advantage of two rapidly growing sectors of the market.