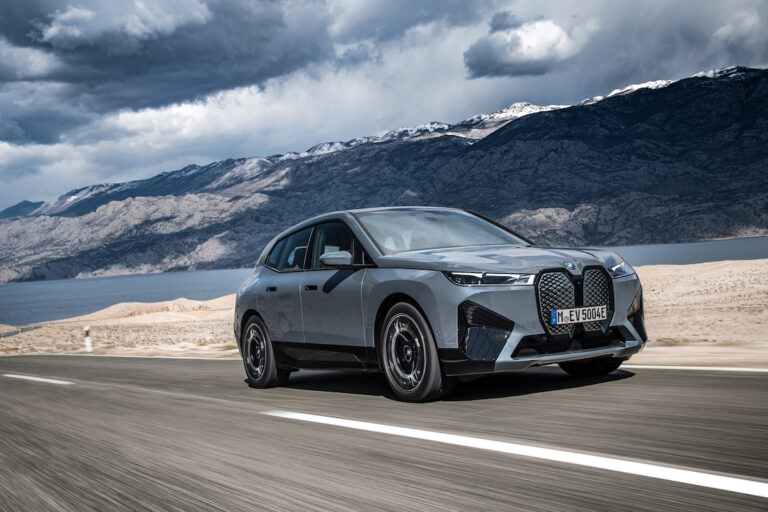 Following the obvious success of the smaller i3 and the larger iX3, we now have this new all-electric BMW iX. Sitting halfway between the X5 and X7 SUVs in terms of size, the iX has been built and designed from the ground-up as a purely electric car.

Available with two battery choices, 71kWh and 105kWh and with a range of up to 380 miles, there’s no question about its future popularity even with its eye-catching styling with the UK likely to be the third largest global market for the car.

Let’s tackle the elephant in the room straight away. There’s no question that the iX is a somewhat challenging design and on the road turns as many stomachs as it does heads. If you fall into the former category, the good news is that in the metal the iX is rather easier on the eye than in pictures.

No, there’s no getting round that dominant large front grille – which despite its looks is actually solid and a not a proper grille as such – but the slim headlights and rear lights do go some way to reducing the visual size of what is not a small car.

There are some clever hidden details too. That solid grille actually has a special polyurethane coating that enables it to self-heal stone chips or small scratches. The same goes for the front and rear BMW badges – the front one hides the filler for the windscreen washer fluid, while the rear badge houses a small extending spray function for the reversing camera.

With that substantial 105kWh battery on board in the flagship xDrive 50 version, it’s little surprise that it boasts a decent 380 mile range. But while the majority of early orders have been the 50 version (no small change starting at £91,905), once all versions are available, it’s the 40 model with its 71kWh battery and 257 mile range, that will account for around 80 per cent of sales.

BMW’s efficiency claims for both versions of the iX are roughly similar ranging between 2.7 and 3.2mls/kwh. That’s not bad for what is obviously not a small car – and not a light one either with the 40 tipping the scales at 2365kg and the 50 the wrong side of two and a half tonnes. More on this later. During our admittedly short test drive, we averaged 2.4mls/kwh, but with a little more care and predictable driving conditions, it wouldn’t be too hard to match that 2.7mls/kwh claimed figure.

BMW iX – ON THE ROAD

Even with large SUVs like its X5, BMW has still managed to deliver cars that handle and drive well, especially for those who enjoy their driving more than most.

There’s no denying that the hexagonal steering wheel takes some getting used to, but while it may not be all that nice to look at, it actually works well in practical everyday use and isn’t the hindrance you might expect. The steering itself is direct enough, but it’s certainly not as dynamic as, say, an X5, but there’s little doubt that the forthcoming M60 version will resolve that.

With the equivalent of 523bhp and a 0 to 60mph time of just 4.6 seconds, the xDrive 50 certainly isn’t slow, but on the other side of those virtual (and very real) scales is that hefty kerb-weight. Yes, there’s performance, but there’s also a lot of inertia going on and that’s rather harder to disguise from the driver on the move. You wouldn’t call the iX ponderous, but at the same time it’s not a car you’re going to be throwing into corners with abandon. The ride quality is excellent though.

As with the new i4, the iX offers two initial versions of regenerative braking with B offering a high level and Drive a programmable mode. The preferred level of regen in Drive can then be pre-set to Adaptive, High, Moderate or Low. Adaptive uses the forward radar and sat nav (even if not in actual use) to alter the level of regenerative braking according to the road and traffic conditions. We’ve already experienced this in BMW’s smaller iX3 and felt that it worked very well, but on this occasion actually preferred the predictability of the more traditional B mode during urban driving.

After the iX’s controversial exterior, if you thought you were going to get away with a more conventional interior, then think again. But this time, the news is all good. Imagine a combination of the i3 hatchback’s design with the quality of the X5 and X7 and you’re not far off.

The cleanly-design dash is dominated by a pair of curved screens in front of the driver and towards the centre of the car, while there’s a walk-through floor and a lovely, tactile wooden base for the haptic controls on the iDrive. These work well but with a lot of the controls operated via the central screen, it does take your eyes off the road quite a lot, although there’s no doubt this would lessen with familiarity.

There’s a pair of USB A ports for the front and another pair for the rear, while the panoramic glass roof and frameless doors make it a very light and airy place to be. That panoramic roof, incidentally, is also electrochromic, so can turn opaque at the touch of a button. There’s also loads of space with a lot of head and legroom in the back and some good storage – although the traditional glove box is tiny. At 500 litres (1750 with the seats lowered), the boot is a decent size.

Generally speaking we’re big fans of the overall interior design of the iX, but some small elements such as the sculpted clear plastic for the door-mounted seat controls and the buttons instead of normal door handles feel a little out of place. When you do open the door, the carbon-fibre making up some of the iX’s body is also, rather neatly, visible in the door shut.

As we hinted at earlier, the iX’s biggest problem may be that some potential customers don’t even get through the showroom door at all. The polarising opinions around the iX’s styling haven’t affected early orders though where the 50 version has already proved popular.

That’s a shame because the more time you spend with the iX, the more you get to like it, from the interior to that decent range (especially in the 50) and it feels a step change in the way that BMW is tackling its next generation of battery-electric models, particularly with the materials used and the layout inside.

Together with its new all-electric i4 and the existing iX3, there’s no doubt that BMW has pushed forward in terms of its electric models and buyers will surely get used to that styling in time as they did with past BMW design changes. The iX is definitely a car where the beauty goes a lot further than skin deep.