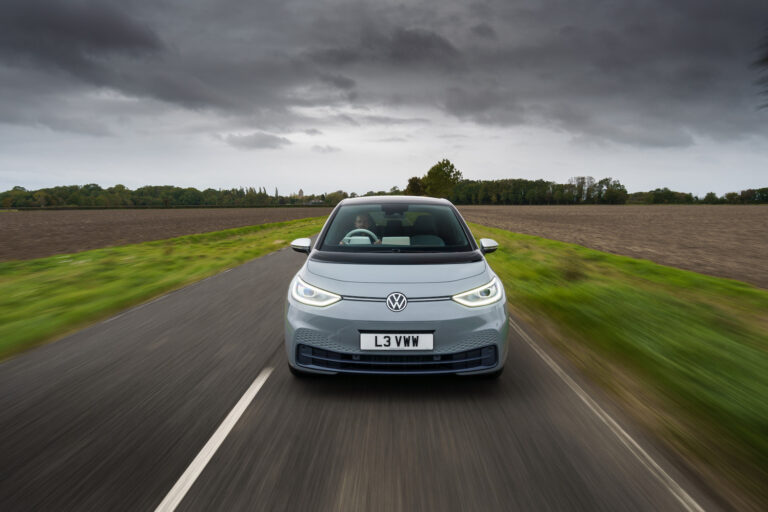 On sale since 1974, it’s no real surprise that the Volkswagen Golf has become so entrenched in the minds of so many car buyers. The go-to mid-sized hatchback, it’s one of those cars where simply the model name, Golf, is immediately recognisable.

Volkswagen will be hoping that’s the case for this ID3 hatchback and all of its ID fully-electric range of models too. This ID3 was the first car to be launched on VW’s new electric car platform and we already have the ID4 SUV and ID5 too.

The ID3 is offered with three different battery packs up to 77kWh, but this particular ID3 that we test here, is the entry-level model with a 45kW battery.

First things first, there’s nothing scary or exciting about the styling of this ID3 and very little giveaway to its battery rather than petrol power. With VW needing it to appeal to EV newcomers that’s understandable, but there’s no question that it’s very middle of the road. This is not a design that’s going to scare the horses.

Having said that, overall it’s a pretty clean design and while we’re not fans of the new flat VW badge or the odd pattern of bumper dimples either side of the front number plate, it’s not a look you’re going to hate – it’s just not one you’re likely to love either.

As mentioned earlier, the ID3 is offered with a choice of three different battery packs – this 45kWh and then 58kWh and the flagship 77kWh version. Understandably, each brings a step up in terms of its fully-charged range from 216 miles in this 45kWh up to 264 miles in the 58kW and 340 miles in the 77kW.

Plus, when the price difference between the 45kWh and 58kWh is as low as £1500 (so likely to be a tiny amount extra per month of a finance plan), it’s a wonder why anyone would choose this 45kWh car over the 58kWh with its extra range. We usually applaud greater choice for buyers, but here the pricing means it doesn’t make sense.

With this 45kW model, the ID3 boasts a 0 to 60mph time of 8.9 seconds and a 99mph top speed along with an excellent 4.5mls/kWh average efficiency. Matching that in real-world driving proves rather tougher though and we only managed 3.5mls/kWh although that’s still pretty respectable for a mid-sized hatchback. The remaining range is slightly too reactive to your immediate driving however and can seem to fluctuate a lot, especially in cold weather.

For a full charge on a standard home wallbox, the ID3 takes just seven hours and 30 minutes, while at a 100kW rapid charger it can get to 80 per cent in just 30 minutes. A mode 2 charging cable for a three-pin plug for emergencies is a £180 option.

Aside from its sportier models, Volkswagen isn’t known for providing its cars with high levels of driver feedback or involvement and so it proves here with the ID3. Ok, so most ID3 customers are unlikely to be cornering their car on its door handles with regularity, but at the same time, the likes of Kia with its latest EV6 have shown that a good degree of enjoyment can be had from an all-electric car.

Unfortunately though, enjoyment isn’t likely to be high up the list of any ID3 driver. To begin with, the electric VW is largely inoffensive in the way that it drives but, with more time, a few more niggles start to set in. The ride quality is poor and the car constantly fidgets over road imperfections and never settles down, while the steering is entirely lifeless and anodyne leaving the driver with no idea of what the car is doing beneath them.

A nannying lane-assist function constantly pushing you back into your lane and also an overenthusiastic emergency braking system which uses the forward radar and panics when nearing parked cars doesn’t help matters either.

The four driving modes, operated via a mode button below the main infotainment screen give you the choice between Eco, Comfort, Sport and Individual, but again, other than slightly stronger regenerative braking in Sport mode, to us they seemed to make little difference to the overall feel of the car.

As mentioned, the Sport driving mode does provide a halfway-house between these two, but ultimately we’d prefer more choice than this basic system, especially as the lack of any regenerative braking in the basic Drive mode can sometimes catch you unawares, then leave you having to brake harder than you anticipated.

For a car manufacturer that has a reputation for build-quality, excellent ergonomics and useable everyday layout, it’s easy to wonder what has gone on with this ID3.

On the face of it, it looks futuristic enough with a driver’s display screen that moves up and down with the reach and height-adjustable steering wheel, and a larger central screen that houses the infotainment system and main controls. It’s comfortable with height adjustment on the driver’s seat, fold down arm rests for the two front seat passengers and good head and legroom for adults in the rear.

A pair of USB-C points are provided in the front and a further two for those in the back and there’s a third Isofix child seat mounting point on the front passenger seat. There’s also a reasonable sized boot at 385 litres (1267 litres with the rear seats folded down) which is a good boxy shape too.

That’s where the good news largely ends however. For starters, some of the plastics used throughout the cabin aren’t what Volkswagen buyers might expect. Even quite high up on the dashboard, they are hard and feel quite cheap to the touch.

Then there’s the ergonomics and infotainment system. The majority of the car’s controls are on the main central touchscreen, but there are other touch-sensitive buttons as well as haptic-feel controls on the steering wheel. But then the controls for the lights and heated rear windscreen are on a separate section, mounted on the dashboard between this screen and the driver’s display, where it looks like an afterthought.

The same goes for the switches for the electric windows. Rather than having four switches as is usual, there are just two switches, with another touch-sensitive control to switch them to controlling the rear windows. It’s a solution to a question nobody ever asked and for a family car, where the driver might want to regularly operate the rear windows, it’s a two-function operation where you used to have just one. It’s really odd.

All that is before you’ve even got to the infotainment system. Yes, the menus get easier to operate with familiarity, but that doesn’t solve the fact that it’s very glitchy and often doesn’t work properly. Overall, it’s hard not to come away really disappointed with the ID3’s interior.

And that, in a nutshell, is probably the over-riding emotion about the ID3 – one of disappointment. Quite apart from why anyone would buy this 45kWh model over the longer-range 58kWh model given their tiny price difference, there is the issue of the car itself.

Whether it’s with the way the ID3 drives or feels on the road or, perhaps more importantly for a car wearing a VW badge, the way the interior feels built down to a budget, there are too many elements of the ID3 that fall short to recommend it against rivals. And, when EV buyers in particular, are already proving to be less badge-loyal than ever before, that could well turn out to be to VW’s biggest regret.