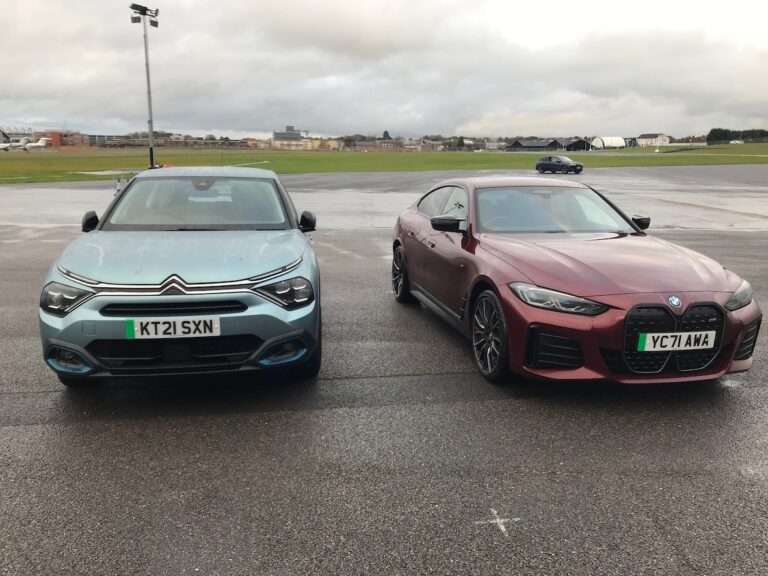 Pure EV or not pure EV?

What do the Citroen e-C4 and the BMW i4 in the above picture, both have in common?

It may sound like the opening line to a bad joke and your first assumption may be pretty little, but the reality is rather different. The reason is that if you’re after an EV, you often have a choice of two different types of car.

The first group is specific EV models, that is those cars that have been conceived and developed exactly – and only – as purely electric cars. Examples of these are the likes of the Honda e or Renault Zoe or the Kia EV6. They’ve been developed from the ground up only as electric models and therefore often use something referred to as a ‘skateboard’ platform, where the batteries sit in a flat panel in the wheelbase between the front and rear wheels.

The second group is where our Citroen e-C4 and BMW i4 come in. On the face of it, they’re much the same, being electric-powered cars, just the same as the first group. However, elsewhere in their respective manufacturer’s ranges, there is the same car available with an internal combustion engine or perhaps a plug-in hybrid. As well as our French and German examples, others might include the Peugeot e2008 or the Vauxhall Corsa-e.

So what’s the difference between the two groups and does it really matter? The first group has the advantage of being an EV only model, developed specifically with EV power in mind. The only problem is that they can often be more expensive as manufacturers have to make the car profitable over the course of that particular car’s shelf life. That might mean that it stays longer in a car manufacturer’s line-up than usual too as they try to recoup some of those development costs.

The same can also apply for spare parts costs too. Everything from body panels to interior parts and even smaller items such as wheels or headlights could be more expensive due to its lower production numbers. Like anything else, the more of something you can build, the lower the price will be, but if the car itself will be built in relatively low production numbers compared to other models in a range (and we’re talking global production here), then those prices will be affected.

From that same manufacturer’s point of view, the second group has the advantage of being able to offer one single model in a number of power choices – sometimes petrol, diesel, hybrid, plug-in hybrid and fully electric. This enables buyers to be able to make a direct comparison and an easy choice between those difference fuel choices in exactly the same car. It also offers customers a car that’s familiar and might not feel daunting in the same way that a fully-electric model might.

The only potential problem with the second group however is the same advantage of the first group. Because the platforms of the cars have been developed to take both electric and traditional engines, it has enabled car manufacturers to get electric-powered models into showrooms earlier than some rivals. The Citroen e-C4 for instance arrived in early 2021, while its Peugeot 308 and Vauxhall Astra sister models won’t have their all-electric versions until 2023.

The downside of that however is the same fact, again, that they’ve been developed for both. In simple terms, it means that they can sometimes be compromised in terms of their packaging. Why do you need to make space for an internal combustion engine, gearbox or fuel tank when there aren’t any there? Those are obviously all still absent in the electric version of the car, but it has still been designed for them from the outset for the other ICE versions of the same car.

So which of the two is better? Both sides have their pros and cons and the only real answer is to choose the EV that best suits you and your everyday needs.