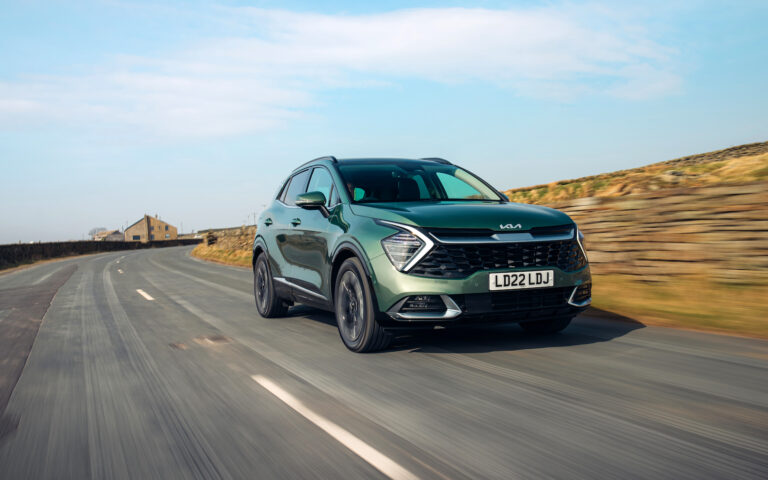 It’s no exaggeration to say that the Kia Sportage has transformed the face and the fortune of Kia. The Sportage is the biggest selling Kia both in the UK and Europe, with more 300,000 of them having left British showrooms since 1995, the majority of which have been the outgoing model.

That’s a lot of weight on the shoulders of this fifth-generation Sportage and especially this plug-in hybrid version, the sister car to the Hyundai Tucson. So how will it cope with that pressure in an ever-growing and more successful Kia line-up, especially when you consider the likes of the forthcoming Niro which is smaller but will again offer an all-electric version.

As with the all-electric EV6, Kia’s design department has been smashing the ball out of the park in recent years and this Sportage is no exception. We especially love the boomerang shaped lights framing the front grille as well as the echoes of the pinched, raised rear of the EV6 as well.

The family resemblance is one that’s echoed with the forthcoming e-Niro too and for us that’s no bad thing. We were fans of the outgoing fourth-generation car, but while this one is longer, wider and taller, we think it’s probably the best looking Sportage so far. Crucially too, it’s probably slightly more conservative than the Tucson’s grille-dominated front end which, while we like it, isn’t to everyone’s tastes.

With no plans to offer an all-electric Sportage, there is simply the standard hybrid version of the car and this plug-in hybrid model. Kia’s initial expectations are for sales of this plug-in hybrid to only account for 10 per cent of all Sportages leaving showrooms, but we think it’s likely to be higher than that.

The reasons why are numerous. There’s a 1.6-litre petrol engine linked to a 13.8kWh battery pack producing a total of 261bhp giving the Sportage a 0 to 60mph time of 7.9 seconds and a 119mph top speed. Crucially though, Kia claims a 43 mile all-electric range and 25g/km emissions which is enough to put it into the 8 per cent Benefit-in-Kind tax bracket for company car drivers.

Ok, so that may be the official EAER figure and not the 38 mile range of the mechanically-identical Hyundai Tucson PHEV which is a more likely real-world average (we saw 37 on a full charge), but few are likely to argue with those tax breaks. There’s also a 7.2kW on-board charger giving it a faster recharge time than many rivals.

Kia claims an official 252mpg average fuel economy for this car, which is obviously unrealistic for everyday driving, though we managed a still respectable 67.9mpg average during a lengthy drive that included a stretch of motorway.

KIA SPORTAGE PHEV – ON THE ROAD

It will come as little surprise to hear that the Sportage’s on-road manners aren’t a million miles away from the Hyundai Tucson. The Sportage manages to remain on electric power for as long as possible until the 1.6-litre petrol kicks in and even then it’s a pretty seamless transition.

Those who are taller than average might feel that the driver’s seat doesn’t go down quite low enough – even in its lowest position it can still feel like you’re sitting on the car rather than in it. The low leading edge of the dashboard kind of exacerbates that feeling too.

This isn’t really what you’d call a driver’s car though. There’s little feel for the driver about what the car is doing beneath them, while the ride on the larger wheel options in the range – our car was on 19in wheels – can be a little fidgety on broken roads. Is this a problem? In what is likely to be used largely as a family car, probably not.

We did however really like the side cameras which bring up an image on the digital dash when you indicate of the relevant side of the car. They’re obviously in addition to the traditional door mirrors, but it’s not hard to see a future in which they replace them altogether like the Honda e and Audi e-tron.

As with the all-electric EV6, there’s no question that Kia is nailing its interiors right now, just as much as its exterior styling. Yes, some of the materials and plastics lower down the dashboard aren’t as good as the EV6, but the step forward from the outgoing Sportage is dramatic.

The comparison with the EV6 is a relevant one too, as the Sportage’s interior is very reminiscent of its electric stablemate. There are two main screens with adaptable controls on the touch panel below the main central one. All the touchscreen controls are clear and easy to operate on the move, while there are also USB A and C ports. A panoramic roof makes it nice and light and airy inside too.

What’s really noticeable about the Sportage is just how much forethought has gone into the everyday use of the car by the Kia engineers too. In fairness, it’s not rocket science stuff, just things that will please those families using the car such as the two curry hooks in the front seat backs and also the USB charging point sockets in the side of both front seats. Clever.

On the practical side, there’s also plenty of space for those in the back and rear seat heaters. Further back, there good boot space with 540 litres (1715 litres with the rear seats folded down) and two more bag hooks as well as quick release handles for the rear seats too.

This plug-in hybrid completes the full line-up of Sportage models in Kia’s range with petrol, diesel and mild-hybrid versions. While it’s undoubtedly a disappointment not to see a full EV version of the Sportage, it’s still a surprise that Kia is expecting this plug-in hybrid to account for just 10 per cent of Sportage sales.

For us, given the Sportage PHEV’s talents, we expect that to be higher. Yes, the EV6 and e-Niro will pick up those customers after a full EV, but with the car’s historical success rate and background, we can’t believe that this PHEV won’t take a greater share than that predicted one in ten.

The new Sportage isn’t perfect, but with its superb design inside and out, plus that ultra-low company car tax benefit-in kind bracket, there’s a lot in the ‘positive’ column and not much in the corresponding ‘negative’ one. Make no mistake, this fifth generation Sportage is the best yet.