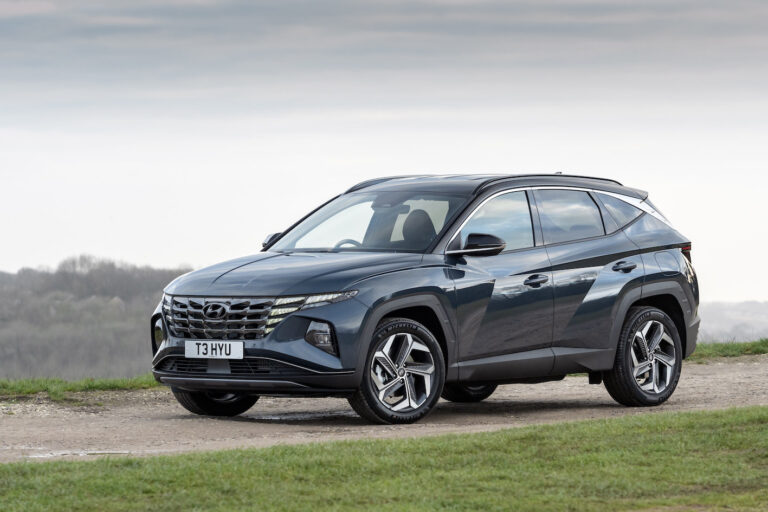 Hyundai has rapidly established itself as a major player in the electrified market. First there was the original Ioniq hatchback, with a choice of fully electric, plug-in hybrid or hybrid forms, while now there’s the new all-electric Ioniq 5 alongside this new plug-in hybrid version of its Tucson crossover as well as the larger Santa Fe SUV.

When crossovers remain as popular as ever and new car buyers are looking towards electrification more than ever, we think it’s a smart move.

Borrowing more than a few styling cues from its hydrogen-powered Nexo fuel-cell crossover, we think that this Hyundai Tucson is superb to look at.

We love the over-sized front grille hiding the headlights and while the chunky sections to it work better from a distance than up close, we think it’s a handsome car with sharp edges over the front wings and down the sides. That’s finished off with a strip of rear lights across the back with twin sections coming down either side that’s not entirely unlike the back of Ford’s Mustang Mach-E.

The Hyundai Tucson gets a 1.6-litre petrol engine combined with a 13.8kW battery to produce 265bhp via its standard four-wheel drive (the standard Tucson hybrid is two-wheel drive) and a six speed automatic gearbox. That gets the Tucson from 0 to 60mph in 8.6 seconds with a 119mph top speed and an all-electric range of 38 miles with 31g/km emissions.

Officially, its average fuel economy is 201.8mpg although as ever with a plug-in hybrid that depends very much on how you drive it. The electric efficiency however is a decent 3.5mls/kW and bear in mind that this plug-in hybrid is a hefty 250kgs heavier than the regular Tucson hybrid.

On a standard 7kW home wallbox, Hyundai quotes a recharging time to 100pc of 1hr and 42mins, with a time of 6hrs and30 mins when using a regular three-pin household plug socket.

HYUNDAI TUCSON PHEV – ON THE ROAD

Driving the Tucson Plug-In Hybrid is a largely inoffensive process. It may not be the most dynamic of crossovers on the market, but by the same degree it’s certainly not one of the worst either.

There’s no doubt that more feedback to the driver about what the car is doing beneath you wouldn’t go amiss especially with the lifeless steering, but the ride quality is particular is excellent making it a very comfortable car for longer journeys. That’s particularly impressive given that extra weight over and above the hybrid model.

The switch between electric and petrol power is seamless, while there are also indicator cameras that show you a view of either side in the driver’s display as you indicate. It’s a clever system that works so well that it soon becomes second nature. It’s also undoubtedly the next step in a future that sees door mirrors removed altogether like the Audi e-tron Sportback and Honda e.

For anyone coming from a conventional car, it may not be a problem, but any driver moving from another plug-in hybrid or even moving up from the Ioniq PHEV, its absence will be a disappointment.

There’s a lot to like about the interior of the Hyundai Tucson. The dashboard features a clean and airy design with a rectangular display screen in front of the driver and another for the main infotainment system with a flat control panel below that. It’s a smooth and clean look but without actual buttons, it will require you to take your eyes off the wheel to operate some of the controls when on the move.

Activating Drive, Reverse, Neutral or Park is via buttons on the transmission tunnel rather than by a conventional gear selector, as is the electronic handbrake, while there are two cupholders alongside that.

You also won’t go short on space in here either. There’s lots of head and legroom in both the front and rear seats and there’s also a panoramic glass roof too. Rather unusually, in a nod back to sunroofs of yesteryear, the front section of the roof can also tilt and slide back.

For those in the back seats there are heated seats and two additional USB charging points as well as sun-blinds built into the rear doors (both great additions in a family car). The boot is slightly diminished compared to the Tucson hybrid but remains a decent size at 558 litres with the rear seats up and 1737 litres with them lowered. Plus there’s an electric tailgate.

Hyundai adding Plug-In Hybrid technology to its new Tucson range alongside its existing hybrid version has to be applauded. Yes, it’s a hefty premium of around £4000 to go up to the Plug-In Hybrid, but used correctly, we think that drivers will immediately see the benefit – not least for company car drivers with its benefit-in-kind advantages.

As stated above, we also like the way that the Tucson looks and its comfort levels on the road too. However, it’s disappointing for the driver not to be able to adapt the level of regenerative braking as with Hyundai’s plug-in hybrid Ioniq. With a good level of equipment, lots of interior space though, there’s no doubt that for anyone after a plug-in hybrid crossover, the Tucson deserves a place on your shopping list.