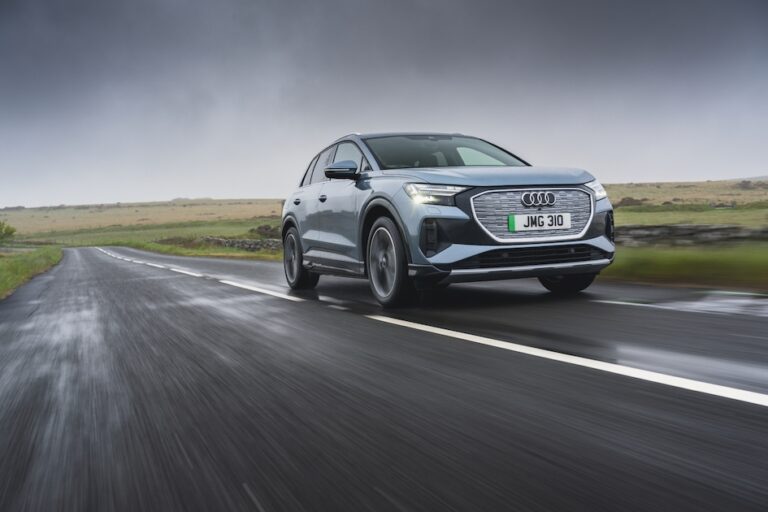 Don’t under-estimate the importance of this new all-electric Audi Q4 e-tron. Audi estimates that it will eventually account for a third of all Q model sales and be the second best-selling Audi in the UK, only behind the A3.

Closely resembling the Q4 concept cars of 2019, this production Q4 e-tron is based on the same platform as VW’s ID4 and the Skoda Enyaq, with a choice of two battery outputs, three power levels and two bodystyles.

With the ever-expanding electrification of its range, Audi’s striking e-tron GT sports car might get the pulse racing, but the reality is that it’s the success of the likes of this Q4 SUV that will pay the bills.

With an expected 20,000 sales in 2021, this Q4 and its Sportback sister (which arrives in September) will be a core focus of Audi showrooms for some years to come.

The design is noticeably more aggressive than we’ve seen from Audis recently. The bluff front, sharp crease lines over the front and rear wheelarches, the over-sized 20-inch wheels on this 40 model, there’s a familiarity to it but a freshness too. We like the sharp LED front and rear lights with the fronts programmable for four different LED light signatures and the rear light bar somewhat reminiscent of Porsche.

There are some nice detail touches as well. The traditional Audi four-ringed badge that looks 3D is actually fully flat and behind clear plastic and the e-tron logo is embossed into both the front grille and the rear bumper.

The Q4 e-tron has some substance behind that style too.

While on paper, the Q4 is available with those two different battery sizes, 52kW and 77kW, in reality, it’s the 40 version that will account for the majority of Q4 sales. That’s no surprise either as the 52kW’s range of up to 208 miles and slightly reduced performance, will undoubtedly limit its appeal.

Talking of range, even the 77kW sees a fair amount of fluctuation in range between trim levels. In the 40, it’s only the Sport that manages that headline 316 mile range, with the S Line dropping to 308 miles, then 304 miles for the Edition 1 and 294 for the Vorsprung. Ironically, the more you pay, the less range you get.

However, there’s no doubt that the 77kW battery is the car to go for, although the lack of quattro four-wheel drive until you get to the 50 version may frustrate some buyers when all-wheel drive has become almost ubiquitous in Audi’s high-end ICE models. The 77kW battery also gets an 11kW onboard charger as opposed to the 7.2kW one in the 52kW car.

For our 40, Audi gives an official economy figure between 3.2 and 3.5mls/kWh, while we averaged a respectable 3.7mls/kWh during our test drive which was admittedly without excessively hard driving, but we did have the air con on throughout.

The Audi Q4 e-tron has a variety of different levels of regenerative braking. The Q4’s default is a coasting mode with an auto setting. This uses its knowledge of the road ahead and your driving style to either coast or engage a varying level of regenerative braking, getting stronger as you approach a junction or a lower speed limit.

In real-world motoring, it’s likely that this mode is the one that future Q4 drivers will use most frequently as it works well and is quite intuitive. The alternatives however, can be a little hit and miss. The first is the traditional B setting activated via the gearlever, which gives you a constant, quite strong level of regen power. Again, it’s easy to soon adapt your driving style to this, but there are times when it can feel too strong for the traffic conditions or circumstances.

On top of those however, are a further three modes of regen that can be adapted via the paddles behind the steering wheel which are standard on the Edition 1 and Vorsprung trims but optional elsewhere. These paddles aren’t exactly uncommon in electric cars, but in the Q4 it’s their operation that’s a little odd.

The reason is that not only does it show which level of the three you’re in briefly on the instrument panel then disappears, but that the Q4 doesn’t remain in that mode. Rather like cruise control, the moment you touch the brake or throttle pedal after having used the paddles, the system reverts back to the standard regen mode. Quite why it doesn’t remain on the mode that you’ve just set it at is a mystery – and frankly, also slightly annoying.

The rest of the Q4’s road manners are pretty much as you might expect. It handles reasonably well, even if with a slightly clinical feel through the steering wheel, although the low down weight of the car never fully escapes your mind. The high-speed ride when cruising never really seems to fully settle down either, although rather oddly rougher B roads are taken in its stride.

In the 40 version with the equivalent of 204bhp, there’s also the thorny subject of performance. While Audi quotes a 0 to 60mph time of 8.5 seconds, the fact is that that mid-range when accelerating down slip roads or away from junctions is absent, it just doesn’t have the usual EV punch that you might expect.

Strictly speaking, for most it will be fine, but if you’re looking for that breath-taking sudden EV thrust, you’ll have to stretch to the 50 starting from £51,370 and around £7000 over and above the equivalent 40.

The design details that make the Audi Q4 e-tron so appealing on the outside are continued on the inside.

There are touch-sensitive steering wheel controls that have swipe and scroll functions, a new Dinamica synthetic suede trim made from recycled plastic bottles and head-up display graphics that adapt on screen with the sat nav instructions.

The layout of the interior and the controls will be pretty familiar to any traditional Audi drivers, though the steering wheel might come as something of a surprise. Audi has been squaring off the bottom of the steering wheel of its sportier models for some time, but this Q4 has the top squared-off too. You soon get used to driving with it, but for anyone old enough to remember the old quartic steering wheel famously (and disastrously) fitted to the old Austin Allegro, there’s a delicious irony to its return in a premium-branded car.

Beyond that, the Q4 does boasts some decent practicality though. There’s plenty of interior space, even for adults in the back with the rear quarter lights not making it feel too claustrophobic, while there’s also a decent 520-litre boot, although it is a little shallow.

Although the Q4’s entry level price of £40,750 will undoubtedly get plenty of customers walking through the door, it’s the £44,490 price for the 40 Sport that will be the more realistic figure for most. Audi expects the 40 e-tron S Line to be the best seller at £47,090. Prices for the sleeker Sportback version have yet to be released, but you can expect them to have a slight premium on top of those of the SUV.

Given those expected sales figures for the Q4, Audi is right to be bullish about its latest electric SUV. While the 40 is the model that obviously makes the most sense, the choices of two battery options and three power levels, gives some great choice to EV buyers.

However, the Q4 isn’t a faultless drive and we think that the regenerative braking system could be so much better, but a fully-charged mileage range that’s beyond 300 miles (albeit only for some models), could well be all the tipping point than many customers need to make the switch to electric. With the GT sports saloon and now this Q4, make no mistake, Audi is on a roll.