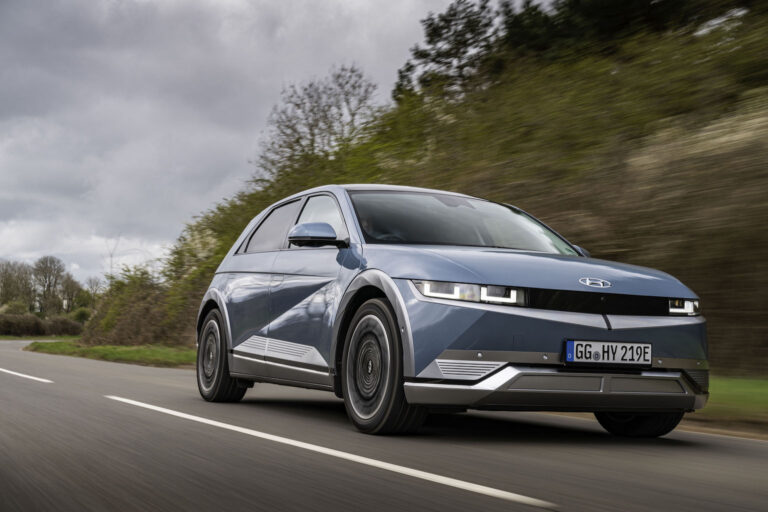 With Hyundai’s original Ioniq hatchback having established a strong reputation in the EV, PHEV and hybrid market, this striking new Ioniq 5 looks to take Hyundai’s electric range into the next generation.

While the original Ioniq hatchback continues in showrooms, this Ioniq 5 is the beginning of Hyundai’s new electric range. With odd numbered models representing SUVs or crossovers and even numbers representing hatchbacks or saloons, the Ioniq 6 will be here in 2022 followed by others shortly after.

While the Ioniq hatchback might have been traditional in its looks, this Ioniq 5 is anything but. We fully appreciate that it might not be everyone’s cup of PG, but to our eyes it’s absolutely stunning and looks even better in the metal.

From the bluff front with the twin rectangular LED lights on each side to the sharp diagonal swage down the side, flush pop-out door handles and the straight lines combined with the dark strip of LED lights across the rear, we think it’s one of the most refreshing new designs we’ve seen in a long time.

That’s carried over inside as well, with a walk-through cabin, twin landscape-style screens in a white surround for the driving information and infotainment system and a drawer-style glove box that opens horizontally. Again, maybe not to everyone’s tastes, but we think it’s up there with the Honda e for sheer style.

It’s also actually a pretty big car too. In pictures it may look the same dimensions as standard hatchback, but in reality it’s a size up from that. That has its benefits with interior space, but also means that the Ioniq 5 tips the scales at a substantial 2020kg – more on both later.

While the Ioniq 5 is officially available in two battery forms – 58kW and 73kW – the vast majority of sales will be the larger-battery model with the 73kW rear-wheel drive version in Premium trim at £41,945 the likely best seller given its 298 mile range.

That isn’t hard to imagine with the 58kW versions having a fully charged range of 240 miles versus up to 298 miles for the equivalent 73kW car. Upgrading from rear to four-wheel drive loses you another 11 miles off that to 287 miles.

Hyundai claims an average energy consumption of 3.7mls/kWh for both the 58kW and rear-wheel drive 73kW car, with a slight drop to 3.5mls/kWh for the all-wheel drive 73kW version. Officially, in Ultimate trim that drops even further to 3.3mls/kWh, although during our test drive we averaged 4.1mls/kWh without too much difficulty and on a warm day.

On a home 10.5kW home wallbox, Hyundai claims a fully charged time for the 58kW car of 4hrs and 59 minutes with the 73kW model taking 6hrs and 9mins. At a 50kW charger, an 80 per cent charge will take 46 or 56 minutes respectively, while the Ioniq 5 also supports 350kW charging. If you’re near a Gridserve station or similar that has that capacity, then an 80 per cent charge can be achieved in an enviable 17 minutes.

HYUNDAI IONIQ 5 – ON THE ROAD

The Hyundai Ioniq 5 has, in effect, five modes of regenerative braking, operated via the paddles behind the steering wheel and clearly visible on the ultra-clear display screen in front of the driver.

These modes start at zero which is effectively a coasting mode and is great for motorway driving and faster roads and motorway, then progress up to three with ever stronger regenerative braking power until the maximum level, iPedal, which will bring the car to a complete stop.

When driving, those different modes translate quite well although the iPedal is best used on slower urban roads as it’s quite strong. In reality, we tended to remain in modes one or two for a degree of regenerative braking and then adjust it with the paddles accordingly as and when the roads and the traffic allowed. It’s a firm reminder that while the latest intuitive systems are all well and good, manual systems can work just as well – and in some instances even be preferable. As well as that regenerative braking, there are three drive modes, Normal, Sport and Eco, accessed via a button on the steering wheel.

Two things soon become evident when driving this all-wheel drive flagship Ioniq 5 though. The first is that it’s seriously rapid both from a standing start and mid-range – as that 5.2-second 0 to 60mph time attests – so your right foot soon learns to treat the throttle pedal with a lot of respect. The rear-wheel drive version is considerably slower at 7.4 seconds for the 0 to 60mph sprint.

The other is that kerb weight and size that we mentioned earlier. That means that despite that impressive performance, there’s an awful lot of inertia when driving quickly and while corners can be tackled with a degree of enthusiasm and little body roll, though there’s not much feedback through the steering wheel about what the car is doing beneath you. We do like the side cameras that bring up the side view in the driver’s display when you indicate though.

Like the Ioniq 5’s outside styling, if you were expecting anything conventional from the inside, then you’re going to be disappointed. Instead, you’re met by a stunning minimalist interior dominated by two large landscape-style screens mounted in front of the driver and centrally with a lovely white surround.

There’s a step-through, clutter-free floor below that with cupholders and a cubby between the two front seats and a drawer-style glove box that slides out horizontally. There’s also lots of head and legroom both for those in the front and those in the back seats as well as a 527 litre boot that’s shallow but long and extends to 1587 litres with the rear seats down.

The seats could do with more side support, but they’re comfortable enough, while there’s a third Isofix child seat mounting point on the front passenger seat to go with the two in the rear.

Overall, it might not have quite the high tech visual appeal of the Honda e, but for everyday use and in terms of its styling, it’s right up there with the best.

As we’ve seen with the latest generation of electric models like the Audi Q4 e-tron, the Ioniq 5 has a headline-grabbing come-and-buy-me price of £36,995 for the SE Connect 58kW model.

However, Hyundai expects that 90 per cent of buyers will dig deeper into their pockets than that and go for the Premium 73kW rear-wheel drive car at £41,945 which makes a lot of sense. Hyundai officials say that the 58kW with its 240 mile range is likely to be bought by those already experienced in driving and owning EVs who won’t be as concerned by the reduced range.

While the Ioniq 5’s styling will undoubtedly polarise some opinions, it’s better value than the Audi Q4 and arguably makes far more of a statement than the likes of the Skoda Enyaq or VW ID4. You certainly couldn’t mistake it for anything else.

Hyundai has already enjoyed a degree of success with its Ioniq hatchback, but as its first dedicated BEV, if this Ioniq 5 is anything to go by, it underlines just what a threat Hyundai can be to larger and more established automotive players in years to come.