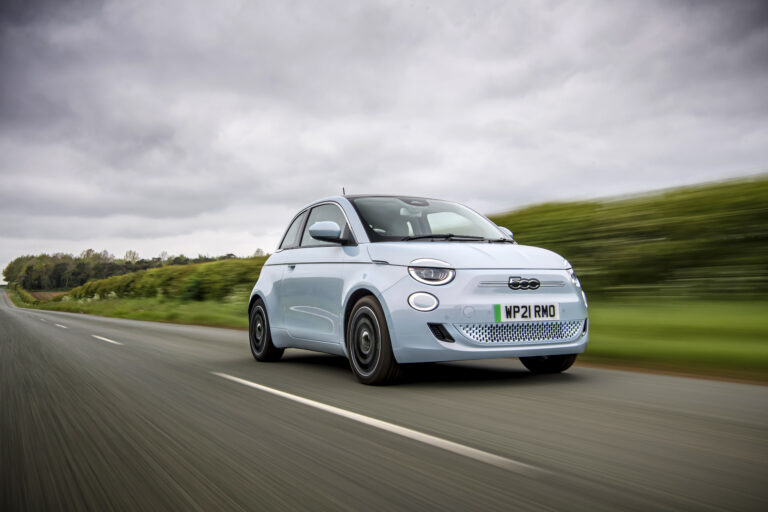 Nobody does small cars like Fiat. One in four of all new city cars in the UK wears a Fiat badge. Can this new generation, all-electric version of the 500 bring battery power to those drivers?

You don’t need us to tell you about the Fiat 500. The second generation model has been a huge success with 400,000 sold in the UK alone since 2007 and now this third version has gone all electric with some interesting choices for customers.

With the likes of the Mini Electric, Honda e and Mazda MX-30 for competition, the new Fiat 500 Electric certainly doesn’t have it easy in the design stakes.

Does it succeed? To our eyes, it’s both yes and no. The ‘new retro’ looks obviously aren’t quite as original as they once were, but we think this new 500 does a pretty good job. We especially like the split circular headlights and the neat indicator blade that pops out of the bonnet shutline.

There are some other really nice touches too like the fact that the adaptive cruise panel is hidden behind the front 500 badge (so there’s no ugly flat panel on show) and the electric-switch handle-less doors.

But, and it’s a big but, the 500 has grown. Really grown. It’s longer, wider and taller than the previous generation and as much as we like it, parked alongside the second generation car, it looks like one of those tabloid newspaper comparisons of your favourite teenage crush that has piled on the pounds in middle age.

And how. In the 42kW version, the new Fiat 500 is a whopping 400kgs heavier than the second generation car which is a hefty amount in such a small car – more on which later.

The Fiat 500 Electric is available with either a 24kW or 42kW battery with ranges of 118 miles or 199 miles respectively.

We’re testing the 42kW version here as it’s likely to account for the vast majority of sales with the equivalent of 118bhp going through the front wheels. Fiat claims an average of 4.4mls/kWh for this 42kW model with a 0 to 60mph time of 9.0 seconds and a 93mph top speed.

We actually averaged 5.1mls/kWh on a mixture of urban and faster A roads and with the vast majority of time spent in Normal and Range modes. That’s an impressive figure.

The 500 Electric can be charged using either a CCS DC rapid charger or a Type 2 connection. At a 50kW CCS charger, it can get to 80 per cent charge in 35 minutes, while a 11kW supply takes 4hrs 15mins to fully charge. A full charge on a domestic three-pin socket takes 15hrs and 15 mins which is relevant as, officially and slightly oddly, that’s the only lead that the 500 comes with as standard.

Just to confuse matters further, at the time of writing, Fiat has a promotion that actually includes that Type 2 to Type 2 lead. When that offer ends though, it’s considering switching those two round, so that the Type 2 lead is standard and domestic three-pin lead an option.

As their titles suggest, the Normal mode offers virtually no regenerative braking at all with more of coasting feel when you lift off the accelerator. The Range mode offers something closer to one-pedal driving with a heightened level of regenerative braking, while Sherpa increases that further still as well as turning off the air conditioning and stereo and limiting your speed to 50mph. All three have a resulting effect on your displayed range too with a 90 per cent battery charge showing as 141 miles in Normal, 146 in Range and 161 in Sherpa.

How do these feel out on the road? The reality is that most drivers are likely to spend the majority of their time switching between Normal and Range. The level of regenerative braking in Range mode has a perfect balance for urban driving. It’s strong enough that you can get that one-pedal driving feel only occasionally needing to touch the brake pedal, but it’s not so aggressive that it feels uncomfortable and it’s very easy to quickly adapt your driving style to.

The driving experience isn’t perfect though. Although the steering wheel adjusts for both height and reach, the driver’s seat doesn’t adjust for height and feels too high. We also felt that the ride quality could be better too. Our test car was on 16in alloy wheels (other models come with 17s but the Action and Passion come with 15s as standard) and the ride feels quite fidgety on even relatively smooth surfaces. On broken ones, it simply feels too firm for a car at this level.

The 500’s aforementioned weight certainly won’t help that, as it’s definitely noticeable when driving. The steering is direct enough but could do with more feedback and while the baby Fiat’s weight is clearly set low down in the car, you can certainly feel every kilogram, especially with sharp changes of direction. The darty, lithe feel of the ICE 500 certainly isn’t present here.

That’s a shame as it’s a car that’s very easy to like with plenty of appeal. Those comments about the ride aside, general refinement levels are good and the 185-litre boot is a decent size too.

Inside, the 500 is a mix of traditional like the second generation 500 and modern like the Honda e. There remain some familiar 500 cues such as the body colour dashboard and the two-spoke steering wheel, but there’s a digital instrument cluster and higher spec cars get a 10.25in HD touchscreen in the centre of the dash.

The lack of a transmission tunnel means there’s a walk-through style cabin with storage and some additional controls on the box between the two front seats.

The interior is also littered with neat touches with a silhouette of the Turin skyline on the wireless mobile charging pad and the outline of the original 500 on the door bins. Also the Seaqual yarn on the seats of the Passion and Icon models is made from 100 per cent recycled materials.

There’s also an electric door button to open the doors, which feels a little gimmicky but we quite like, although there’s always a conventional handle mounted lower down the door anyway. Despite its grown exterior size, the rear seats are still really only suitable for those aged up to their young teens, but for those with younger children, there’s a third Isofix child seat mounting point on the front passenger seat.

The large central screen and driver’s display both work well and are clear to read on the move and there are two USB points on the dash and down on the transmission tunnel.

The Convertible adds a further £2650 to the hatchback list price except for the Prima where it’s an extra £3000.

Given the Fiat 500’s past sales success, you’d be a brave person to bet against this new electric model. It’s not perfect, but by and large there’s a lot about the 500 Electric to like and, crucially, that real-world economy is very impressive indeed compared to the likes of the Honda e and Mini Electric.

Think of this electric model as an addition to the Fiat 500 range rather than a full-on replacement and its size and weight issues are somewhat easier to stomach too. Likeable styling and plenty of character will lift it above more mainstream alternatives such as the Vauxhall Corsa-e, so it’s hard not to see electric power only expanding the 500 success story still further.