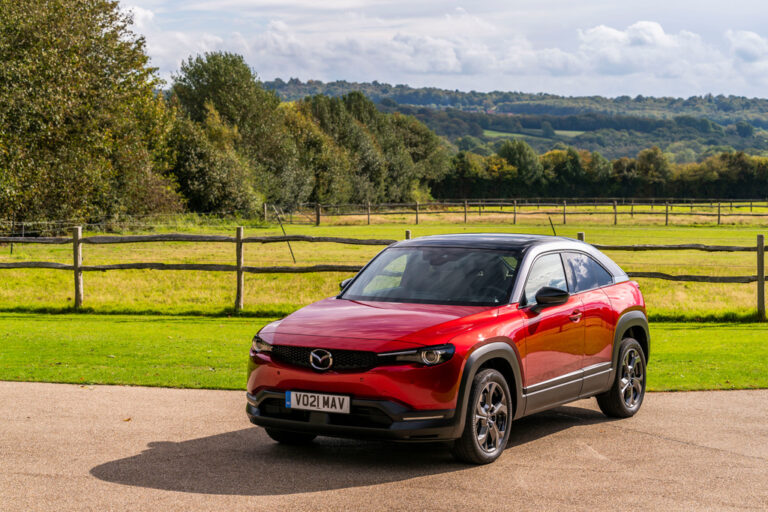 The Mazda MX30 is Mazda’s first all-electric production car and the first of its forthcoming wider electrified range with more to come. With an SUV Coupe bodystyle and rear-hinged back doors, the MX30 is certainly a niche choice, particularly with its relatively limited 124-mile range, but a second version with a range extender petrol engine will join it soon.

The MX30 borrows plenty of styling cues from the rest of Mazda’s traditional SUV range like the CX30 and CX5, which is no bad thing to our eyes.

The purposeful nose and round LED headlights combined with the strong shoulder line and two-tone roof ensure that the family look is easily recognisable alongside the CX range. However, we love the rear-hinged back doors giving a nod to the previous RX8 sports car and also the exposed rear lights.

Under the MX30’s skin is the same 35.5kWh battery as the Honda e, which puts the equivalent of 145bhp through the front wheels. That’s enough to give it a 0 to 60mph time of 9.7 seconds and an 87mph top speed which is respectable rather than especially swift – blame the 1645kg kerb weight (more on which later).

Using the same battery pack as the Honda e but in a larger and heavier car, it will come as little surprise that the MX30’s range of 124 miles will be an awkward mental hurdle for many potential buyers.

It’s better to view the Mazda as a three-door with benefits to rival the Mini Electric and Honda e rather than against more practical family alternatives like the Renault Zoe or Kia e-Niro. Whether potential buyers will see it that way is another matter though.

The MX30 can be charged either using a CCS DC rapid charger, Chademo or AC power. Charging time to 80 per cent on a 50kW rapid charger takes around 36 minutes, while a full charge on a home wall box takes about five hours.

Mazda’s defence of the MX30’s limited range is mainly two-fold. The main reason is the car’s whole life CO2 emissions, but second that a bigger battery would compromise its weight and handling.

There are five main drive settings in the MX30, operated via the paddles behind the steering wheel, ranging from maximum regenerative braking (which will almost bring the car to a standstill) to nothing at all which Mazda refers to as a ‘sailing’ mode. With arrows on the digital dash showing which mode you’re currently in, it soon becomes natural to toggle between them depending on the road and traffic conditions.

So does the MX30 live up to those handling promises? To a certain extent, yes. The steering is light but sharp and direct and there’s a good level of feedback to the driver about what the car is doing underneath you. There’s limited body roll through corners and the ride is surprisingly good considering that 18-inch alloy wheels are fitted as standard across the range.

Part of Mazda’s e-Skyactiv system also feeds a synthesized engine-like sound through the speakers to mimic a traditional engine. Again, it sounds strange on paper, but actually works well and isn’t intrusive.

That’s the good news. The bad news is that you never entirely escape the fact that you feel every gram of that kerb weight especially with the Mazda’s higher driving position and centre of gravity compared to the Honda and Mini. That wasn’t helped by us carrying out our brief test drive in wet weather and greasy road conditions and the Bridgestone Turanza tyres fitted to our test car suffering from a noticeable lack of grip, particularly when pulling out of junctions. There’s little doubt that it’s a good handling car, even if one that you probably would never throw around bends like the Honda e.

Inside is another nod to Mazda’s history with an elegant floating centre console with the lower section lined with cork. It sounds odd and may not be to everyone’s tastes but we rather like it. There are some other more subtle eco-touches elsewhere too with the suit-like door fabric made from recycled plastic bottles and the optional brown vegan leather-style seats coverings in the GT Sport Tech trim. Again, both are a lot nicer than they sound.

As much as we love those rear-hinged back doors, they’re not entirely practical. It’s no mistake that Mazda is pitching the MX30 against the Mini and Honda e, so as we said it’s almost better to view it as a three-door car with benefits rather than a five-door SUV.

Anyone beyond their mid-teens will find the rear seats tight on legroom and foot space under the front seats as well as quite claustrophobic due to the small rear window and the thick C-pillar between the back door and tailgate. That said, there’s a decent 366 litre boot which converts to 1171 litres with the rear seats folded down.

Initially, the MX30 will only be available in First Edition form, limited to a production run of just 500 models although the rest of the range will follow soon after. At £27,495, the First Edition is based on the SE-L Lux version but with a higher spec that lies somewhere between the Sport Lux and flagship GT Sport Tech models.

The entry-level SE-L Lux that kicks off the range is temptingly priced at £25,545 and boasts a good standard equipment level including LED headlights, 18in alloy wheels, reversing camera and sat nav. All prices are after the government grant.

There’s no doubting the unusual nature of the Mazda MX30. It’s an electric SUV Coupe that lacks a decent range and despite boasting five doors of sorts, isn’t that practical for anyone who needs to use those rear seats.  However, it drives well (wet weather grip issues aside), is comfortable, looks good and is an alternative choice that stands out from the crowd.

Mazda has a track record of producing cars that it’s easy to warm to, and this MX30 is no exception. But until the range-extender version joins it in showrooms, it may be overlooked in favour of more traditional rivals. That will be a shame as it deserves better.