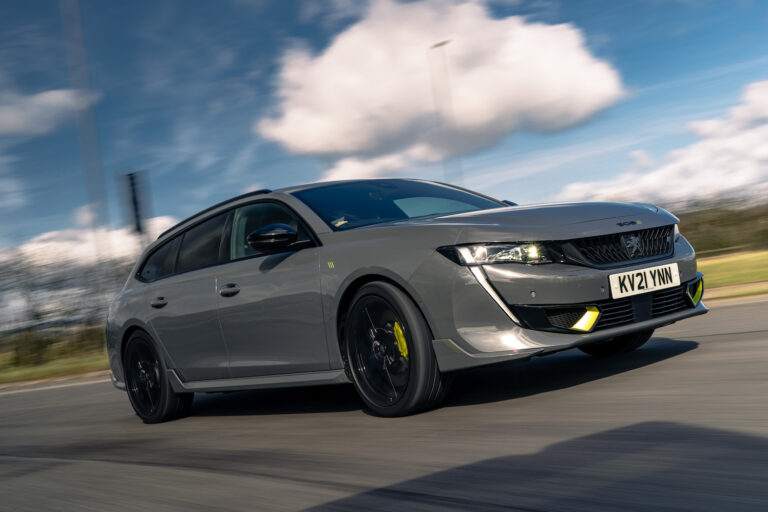 Not so long ago, the UK company car market was dominated by cars like the Peugeot 508. Traditional family saloons like the Vauxhall Insignia, Vectra and Cavalier, Ford Mondeo, Nissan Primera and Renault Laguna, all names now long gone or shadows of their former selves as car buyers increasingly turn towards crossovers.

At least Peugeot is staying true though with the 508, for those who want a family car but don’t want a crossover or SUV, especially with the stunning SW estate version. In fact, it’s going one step further too, with this Peugeot Sport Engineered PSE model, a sporting flagship for the range that combines four-wheel drive with high performance and plug-in hybrid technology. So does that combination succeed, especially with its hefty price tag?

Ok, full disclosure, we’re big fans of the styling of the standard 508, especially the SW. If any car was going to convince drivers back into traditional family saloons like this, then it’s this 508.

And that’s turned up to 11 with this PSE. A widened front and rear track, lowered sporty suspension (more on which later), huge 20-inch alloy wheels, body kit and luminous yellow highlights on the brake calipers, air intakes and with the three strake ‘claw’ marks, this is a stunning looking car. What’s more is just how many heads it turns out on the road – we can’t remember any car, let alone a family saloon, that we’ve been asked about as much as this PSE.

We’ll be driving the standard 508 plug-in hybrid at a later date, but this PSE is slightly unusual as a plug-in hybrid in that it is focussed and tuned towards performance. That means that while it shares the same hybrid underpinnings as the likes of the Citroen C5 Aircross and Peugeot 308, it’s actually a very different car.

Those figures against the clock are highly impressive, but the downside is that you pay for that pace with the Peugeot’s EV range which drops to 26 miles (compared to 33-39 on the standard 508 PHEV). While that may sound like much of a difference, it does mean that even a short journey can start to leave you short on range.

All plug-in hybrids work at their best when you’re fastidious about charging them up, but you do need to keep a sharp eye on the range. On the upside though, the 508 was consistent in showing a full 26 miles of range for a full charge. Peugeot quotes a 1hr 45min recharge time from a home charger or seven hours from a regular three-pin socket. Our test car though had the £300 optional 7.4kW on board charger and charged in closer to four and a half hours on a three pin socket. Rather oddly though, Peugeot only supplies a Type 2 cable and not a three-pin cable which is an optional extra.

If there’s anywhere where the 508 PSE is going to score, and score big, it’s here with its driving experience. Everything from the way it looks to the suspension set up and specially tuned steering, along with the plentiful grip from those huge tyres along with the four-wheel drive, is pointing in the right direction.

So does it succeed? The problem is that the answer isn’t quite as black and white as a simple yes or no. It’s undoubtedly a great and fun car to drive quickly, the acceleration and performance on tap in sport mode is plentiful enough to catch you by surprise on occasion and it can be a very quick car when required.

The steering is sharp via the shirt button-sized steering wheel (though could do with more feel) and it turns into corners well with little body roll boosting your confidence to drive it with enthusiasm. Put simply, it drives with a precision and sportiness that no family estate car really has any right to do.

However, the 20-inch wheels have minimal 35-section tyres and even in comfort mode that results in a fairly firm ride. That’s fine when you’re in the mood for a spirited drive, but rather less so when you’re not in the mood or have the family on board. This is, after all, a family estate car and a criticism of any car that has a sporting slant but is also expected to be a practical family wagon.

There are gearchange paddles behind the steering wheel, but they’re fixed in position rather than being on the back of the wheel itself. Also, the only regenerative braking mode available is just to pull the gear selector into B as the D mode allows the car to coast (preferable when on faster roads).

And that is one of the ironies of the 508 PSE. On one hand you’ve got the frugal practicality of the plug-in hybrid technology, but at the same time you’ve also got the performance element of the PSE and those two things can sometimes feel like they’re pulling in opposite directions. Now, fair enough, nobody buys a PSE by mistake, but at the same time, it’s definitely worthy of consideration with the substantial price premium over the standard 508 plug-in hybrid.

The 508 PSE follows the themes of most recent Peugeot interiors, with its tiny, low-set steering wheel. While it can undoubtedly still induce Marmite-style love-it-or-hate-it opinions, there’s no question that you get used to it with more familiarity.

Peugeot’s digital dash is complimented by the same luminous green PSE highlights from the outside, while there are also real-world shortcut buttons to add to the touchscreen controls. There’s plenty of oddments space with a pair of cupholders and decent-sized door pockets, while there’s also a hidden shelf under the central tunnel with USB points and a second hidden pocket under the armrest. That’s all just as well as the main glovebox is so frustratingly small that it can’t even store the car’s manual.

The sports seats though with a massage function and also extendable under-thigh support and are supremely comfortable. There’s also a decent amount of head and legroom for those in the back seats too, plus on the more practical side there’s a 530-litre boot which is long but shallow with up to 1780 litres of space when the rear seats are folded down. There’s also under-floor storage for charging cables too.

We’re torn about the Peugeot 508 PSE, especially in this SW estate guise. As driving enthusiasts, we’re glad that it exists both as a flagship model for the wider 508 range and also as an exercise in widening people’s horizons and visions about what a plug-in hybrid represents.

The only problem is that, as we hinted at earlier, those plug-in hybrid and performance aspirations specific to this PSE are pulling in opposite directions. As great as it is to utilise that handling and performance, it eats through your electric range even faster than the usual pace – which already isn’t long at just 26 miles. Which then links back to the 508’s plug-in hybrid elements which are fine for short journeys, but otherwise feels compromised against the standard version of the 508 PHEV.

If you can accept those compromises, then that’s fine, but otherwise it seems a high price to pay for what is a good, but not necessarily great, car.