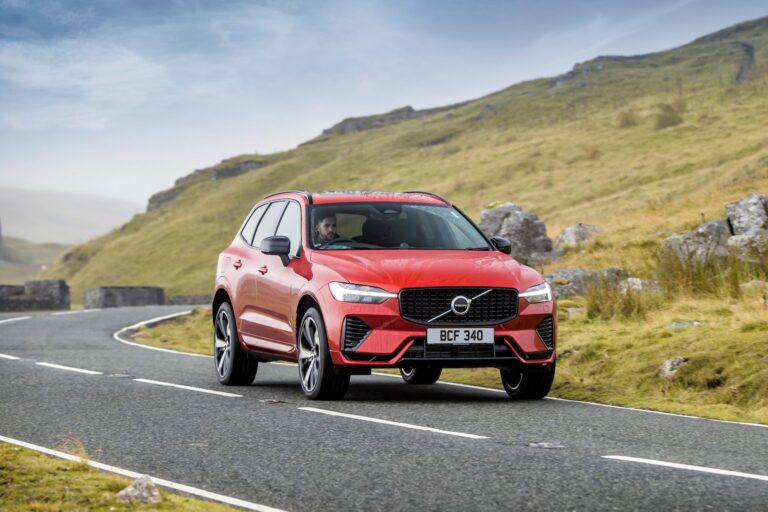 Few cars demonstrate the change in the public face of Volvo and its products better than the XC60 SUV. Not so long ago, Volvo had a reputation for its estate cars and now, along with the rest of the market, that has transformed into SUVs. And none more so that the mid-range XC60, on sale in this generation since 2017, and Volvo’s best-selling model globally since 2009.

This facelifted XC60, in Recharge plug-in hybrid form, comes in three different versions – T6, T8 and T8 Polestar, although before long this will be slimmed down to just two models that also get an uprated battery, lower emissions and an extended range.

There are no huge changes to the refresh of this XC60 and to our eyes, that’s no bad thing. Volvo’s SUV range, with the smaller XC40 and larger XC90 is one of the best-looking on the market, so why mess with a winning formula?

So that means that this ‘new’ XC60 gets a revised front grille and bumper, some new alloy wheel designs and colour along with various changes inside with an improved infotainment system with voice recognition for Google Maps, wireless Apple Carplay and Android Auto and wireless phone charging and four USB ports (although it’s worth noting that these are all the smaller newer USB C ports).

The Volvo XC60 Recharge plug-in hybrid gets a 2.0-litre petrol engine with an 11.6kWh battery in three different power outputs ranging from 340bhp in the T6 to 390bhp in the T8 and 405bhp in the T8 Polestar Engineered Flagship. All are four-wheel drive with the battery driving the rear wheels only. That provides an all-electric range of up to 32 miles with emissions from 55g/km.

Unsurprisingly with that power, even in the T6, that’s enough to get the XC60 from 0 to 60mph in 5.7 seconds and onto a 112mph top speed. The official average fuel economy is 113mpg while on a standard 7kW wallbox Volvo quotes a recharge time of three hours and up to four hours on a standard domestic three-pin plug. Both Type 2 and three-pin cables comes as standard.

However, as of early 2022, this new XC60 Recharge range will change slightly with a new larger 18.8kWh battery and more powerful electric motor reducing emissions to just 25g/km and increasing that all-electric range up to 48 miles – both substantial improvements.

There’s little body roll through corners and the ride quality is good despite it being on 19in wheels. With enough battery charge on board, it also enables you to drive pretty comprehensively on electric power without the petrol engine kicking in. Obviously it does so under heavier acceleration or if you’re really pressing down hard on the throttle pedal, but a digital sliding gauge with a marker showing when you switch between the two makes it easy to stay on electric power as long as possible.

It may not be the most dynamic or enjoyable car to drive quickly, but that lack of roll through corners means that it can actually be driven with a good degree of enthusiasm and precision down twistier roads. The one notable absence is that, aside from switching the gear selector from D to B, there’s no way of adapting the regenerative braking as in some plug-in hybrids.

As with its smaller XC40 Pure Electric, Volvo clearly doesn’t feel that its drivers want to be able to control or adapt their regenerative braking that much – an odd thing when many others are going the other way with automatic sat nav-based systems.

As mentioned earlier, we’re big fans of Volvo’s current styling ethos both outside and in. The large portrait-style touchscreen dominates the dashboard and it works well to use on the move, even if it does take some getting used to. The swiping facility for the car’s secondary controls is best used when stationary though as there are lot of options to choose from that.

While some elements of Volvo’s history are long gone, others are still thankfully present though – especially on the car’s more practical elements. The seats are supremely comfortable (which should almost be a given in any modern car, but often surprisingly isn’t), while there’s plenty of space in both the front and rear seats and lots of storage space around the cabin. The boot is 468 litres with the rear seats in place and an electric tailgate is now standard.

In fact, the only thing about the XC60’s interior that we didn’t like was the clear glass gear selector in the Inscription car we drove (not shown in the image above) which for us felt rather too blingy and at odds with the rest of the car.

It’s not hard to see why the Volvo XC60 has been the Swedish firm’s biggest seller since 2009, especially so with the widespread increase in popularity of crossovers.

As a premium crossover, the XC60 is a good car, but as one that has a choice of three – soon to be two – different plug-in hybrid models, then that only adds to its appeal still more. The real underlining factor though is that the forthcoming plug-in hybrids are about to become more powerful, with lower emissions and a much increased all-electric range.

That increased range will bring with it other benefits too including a much reduced Benefit-in-Kind tax rate to just eight per cent down from 12 per cent. Make no mistake, that will make several company car drivers sit up and take notice, especially those who aren’t quite yet ready to commit to a fully electric car.

Yes, we’d like to be able to tailor the XC60’s regenerative braking for a better on-road experience, but overall there’s lots to like about the XC60 and very little to criticise. With Volvo’s Recharge models now accounting for a fifth of all its sales, that’s no surprise.